The last entry in my November 2019 HCRH trip covers two short segments that aren’t part of the HCRH State Trail: the so-called “weigh station” segment and a tiny portion in Wyeth that until recently dead-ended at some rocks at undeveloped Lang State Park. These might be small, but each piece has its own history that deserves noting.

The history part won’t go back too far for too long, since it was largely covered in my Shellrock Mountain and Ruthton Point posts. Both segments were graded and paved in 1914-15 and were bypassed with the construction of I-80N in the 1950s. You can still skip to the photos of the Weigh Station or Lang Park segments if you prefer.

Unlike the other segments I’ve covered so far, this segment was constructed a significant distance from the earlier 1872-73 wagon road, which travelled over what is called the “Wyeth Bench” to a height of about 640 feet1 before descending back down to the water level. The later 1913 Columbia River Highway was constructed much closer to the river, roughly parallel to the railroad grade constructed in 1882. Much of the old wagon road survives today as Herman Creek Road, save for a section where the modern road deviates to the north for a gentler grade.

The USGS Topographic Maps below show the evolution of the route between Cascade Locks and Wyeth. The 1911 map shows the original wagon road over Wyeth Bench. The 1929 map shows the constructed Columbia River Highway, with the wagon road relegated to an “unpaved” status. Finally, the 1955 map shows the straightening of the highway for its eventual conversion to a freeway. The inset shows the weigh station segment that was severed from the mainline. 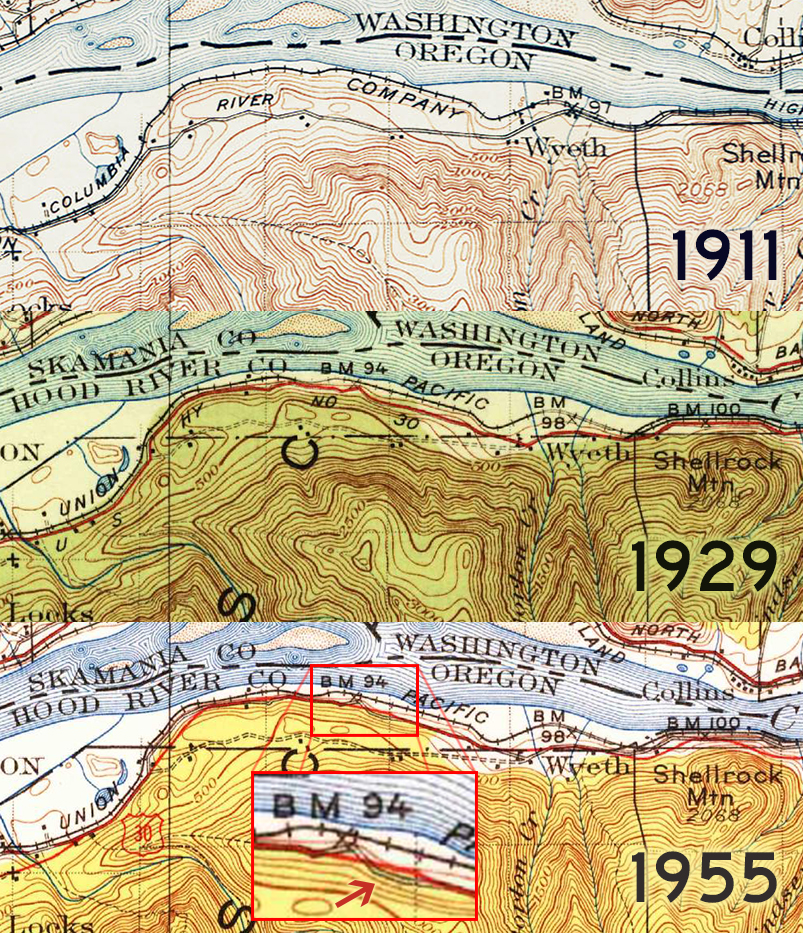 (Note that the inset shows a second orphaned portion north of the realigned CRH immediately to the west of the weigh station segment, a little closer to Anderson Point. This part was most likely destroyed when the newly-straightened highway was twinned in the 1960s. However, some remnants might exist in this small area wedged between the freeway and the UP tracks; further study is needed to know for sure.)

Ochi’s 1981 study touched upon segments she called “generally short, isolated and lend themselves less easily to reuse.”2 However, the weigh station segment was not one of them; it wasn’t rediscovered and cataloged until ODOT released its Historic Columbia River Highway study in 1987. It was also at this point that the segment was given the “weigh station” moniker, as it was “located above the truck weigh station on the south side of I-84 between Government Cove and Wyeth.”3 Accessible via “a gravel road behind the truck weigh station”, this 0.2-mile long piece was described thus:

Both ends of this segment were cut when I-84 was constructed, leaving steep drops to I-84. A right-of-way fence crosses three times at the eastern end. The roadway is blocked by piles of debris east of the fences and at the western end. South of the Highway is an area that has been used for a dump.4

While the roadway was in good condition, no present uses or special features were identified.5 In fact, since ODOT found no improvement or utilization opportunities, they forgot it existed again when they created their 1996 HCRH Master Plan:

The Herman Creek Road over Wyeth Bench has recently been paved and should be used as the hiking and biking connection between Cascade Locks and Wyeth, since no substantial sections of the original HCRH remain.6

They rediscovered it just in time for the 2006 revised plan, but reaffirmed that connecting it to anything would be impossible due to the terrain and lack of available ROW:

No substantial sections of the HCRH remain in this section. There is a small section of pavement south of the old weigh station. There is little opportunity to construct a connection project, because there is little available land between the Columbia River, the Union Pacific Railroad, Interstate 84 and an unstable, steep hill.7

Friends of the Historic Columbia River Highway concurred around that same time:

Between Cascade Locks and Wyeth there is little of the original highway remaining. Interstate 84 and the small remaining piece of HCRH are on a massive landslide; additional construction on this landslide is not advised and so a portion of the HCRH State Trail is not planned for this section. Therefore, the paved Hood River County road, south of Interstate 84, variously referred to as Wyeth Bench Road or Herman Creek Road will serve as the connection.8

Officially spurned by ODOT, this segment continues to decay just feet from the interstate, chained off and forgotten.

The weigh station at Wyeth has long since closed down, hence why it’s now called the old weigh station. I have no idea when it closed — satellite imagery so far hasn’t been helpful — but it was still shown in the March 2006 Hwy #2 straightline chart between mileposts 49.28 and 49.56 eastbound. It was removed in the March 2010 straightline chart, but oddly enough the ramps were kept, simply shown as “road”s. By comparison, the new weigh station eastbound is located in Cascade Locks about 4 miles to the west along I-84. Also known as the Cascade Locks Port of Entry, it was lobbied for by local businessman Carroll Tveidt, who sold the state the land it was eventually built on.9 Groundbreaking for the POE occurred in mid-August 1988, and it was opened soon after.10

All photos in this section were taken by me in November 2019.

Aside from the portion leading to the maintenance dump, this old section had some stunning forest scenery. Instead of a “right-of-way fence [that] crosses three times at the eastern end”, I found almost a half-dozen felled trees, with a pair of them making it close to impassible without some extreme maneuvering. With that, plus ODOT considering the hillside “unstable”, I wouldn’t be surprised if additional trees fall to block this section further… or worse, a mudslide takes out some (or all) of it. Only time will tell.

The last segment covered is the portion leading into Lang State Park. Again, feel free to skip to the photos.

Compared to the weigh station segment, this segment wasn’t constructed along the old wagon road, although it was built closer to it. Due to the construction of both Bonneville Dam and I-84, the original wagon road in the vicinity of the Wyeth interchange has likely been destroyed or significantly altered. I-84 also impacted the Columbia River Highway — practically everything in the Wyeth area west of the 1919 Gorton Creek Bridge was obliterated.

While this segment was mentioned briefly in the Ochi’s 1981 report, a more thorough description didn’t appear until ODOT’s 1987 study. Note that Herman Creek Road was still unpaved this late in the 20th century:

Near the Forest Service’s Wyeth Campground, I-84 exit 51. The Gorton Creek Bridge is located at approximate original milepost 52.7 … Local residents also have access from this segment. This segment is connected to the segment east of Cascade Locks by a gravel road to Government Cove.11

The study further recommended that Herman Creek Road be paved, at least partially, to “provide a bicycle connection between segments of the Historic Columbia River Highway at Government Cove and Wyeth.”12 However, the study doesn’t appear to mention explicit plans for the 1,000-foot stub that extended past Herman Creek Road into what is now Lang State Park. Both the 1996 and 2006 Master Plans gloss it over, preferring to focus on both crossing the treacherous Shellrock Mountain and possibly utilizing the short existing HCRH segment between Wyeth and the mountain.

However, once the decision was made to keep the trail south of I-84, ODOT finally started acknowledging the stub’s existence as a section of former highway. In 2009 they released a series of documents showing their plans for the remaining HCRH segments to be reconnected, with the stub lumped into Segment 2 “Wyeth to Shellrock Mountain”.13 The original plans called for the construction of a trailhead and parking area where the segment dead-ends, with the HCRH State Trail extending eastward from there: 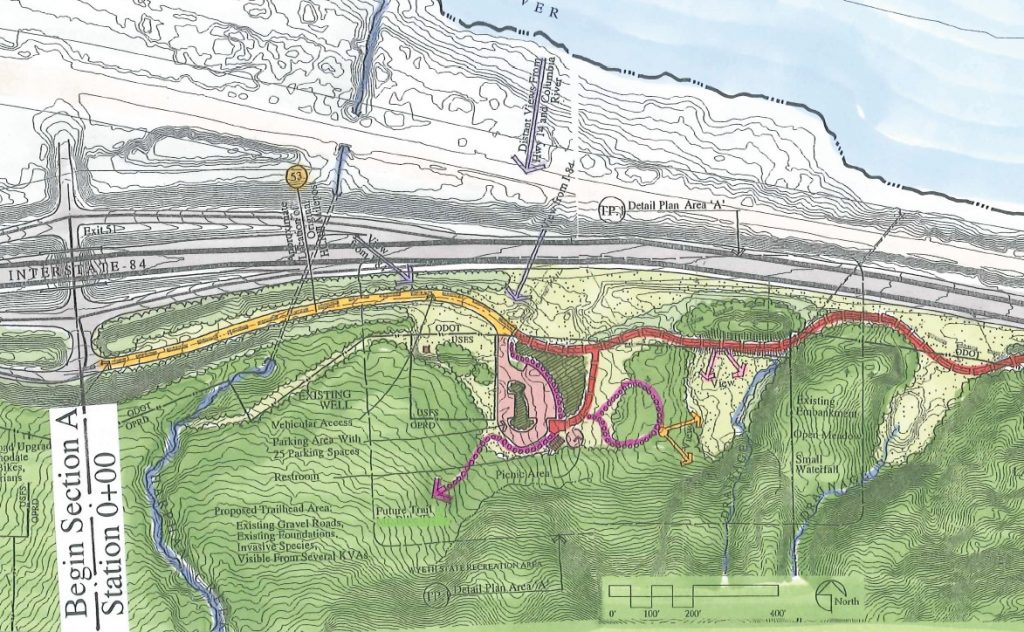 The trailhead description and plan were fleshed out a couple pages later, along with a low-resolution map that shows in greater detail a square of US Forest Service land housing a well house/pump house:15 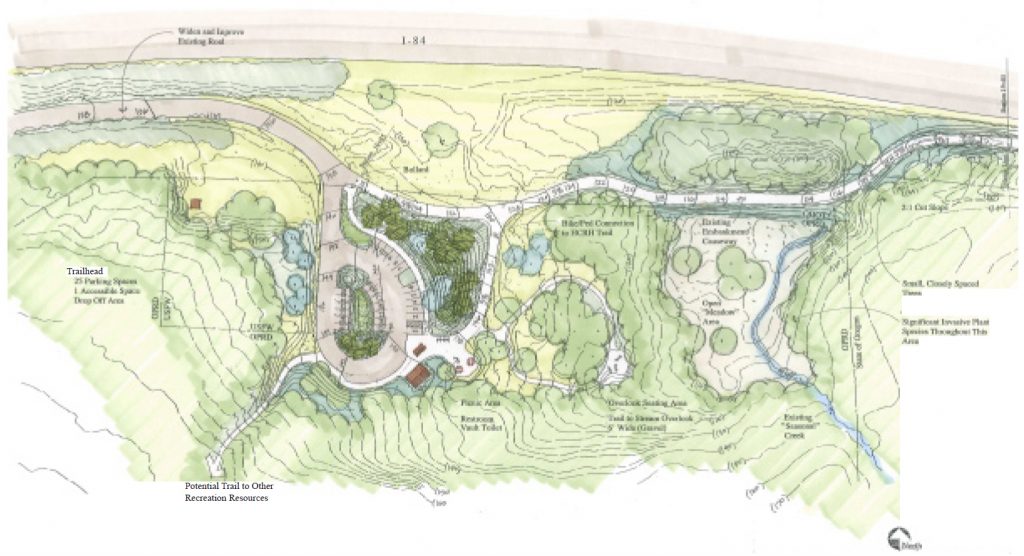 The plan gives this description for the trailhead, highlighting some of the challenges of using this location:

Once overhauled, the trailhead would have included 25 parking spaces including 1 accessible space, a bus/trailer turnaround, bike parking, a biking/hiking staging area, a restroom, a kiosk, a picnic area, a short loop trail near a small meadow, and a future trail connection to “Other Recreation Resources” (the page 12 map has “to Mt. Bike Trails” oddly greened out in that same location).

For some reason, the plans changed by 2016.17 The trailhead was moved further west to the vicinity of the Gorton Creek Bridge, probably to better serve the Wyeth campground on the other side of the creek. The plans called for parking, restrooms, a kiosk and a bike station. From there, walkers and bikers can travel east on their own bridge over Gorton Creek with the HCRH State Trail following a new alignment through the Wyeth campground to the east; this new alignment bisects the USFS land and the would-be scenic meadow at Lang State Park.

This was the design that stuck; the new trailhead opened alongside the new Wyeth-Starvation Creek trail segment on August 3, 2019. Nothing is currently planned to utilize the actual old HCRH; in fact, it has now been gated off to most vehicular traffic, to be used only by state and federal employees apparently.

Again, all photos of this segment were taken by me in November 2019.

It was at this point that I was hit with a stench so overwhelmingly awful that I was unable to continue, and I hastily retreated to my car to escape the odor. Not sure if it was seasonal, but I might have to come up a different time of year to see if it’s any better. I didn’t notice any relics of the old highway (mileposts, etc.), but a more thorough search is in order.

I also took a couple of shots near the new HCRH State Trail Wyeth trailhead, including the new hiking/biking bridge over Gorton Creek.

In conclusion, thank you for following along with rediscovering various segments of the Historic Columbia River Highway. After doing some more research, I have a few new locations to scout out and explore, including a couple on the Lower Columbia River Highway between Portland and Astoria. Until then, I plan to circle back to a couple of blog post projects I’d shelved for various reasons: