Recently I was able to cross off one of my Oregon roadgeeking bucket list items: Rediscovering an orphaned and largely forgotten piece of the Historic Columbia River Highway! This roughly ⅓-mile abandonned segment is just east of Wyeth near Shellrock Mountain, bordered by the Columbia to the north and I-84/the UP tracks to the south. Built over 100 years ago and bypassed in the early 1950s to increase traffic flow and improve safety, it has largely been left to rot inside a grove of evergreen trees next to an older parallel railway alignment closer to the river. 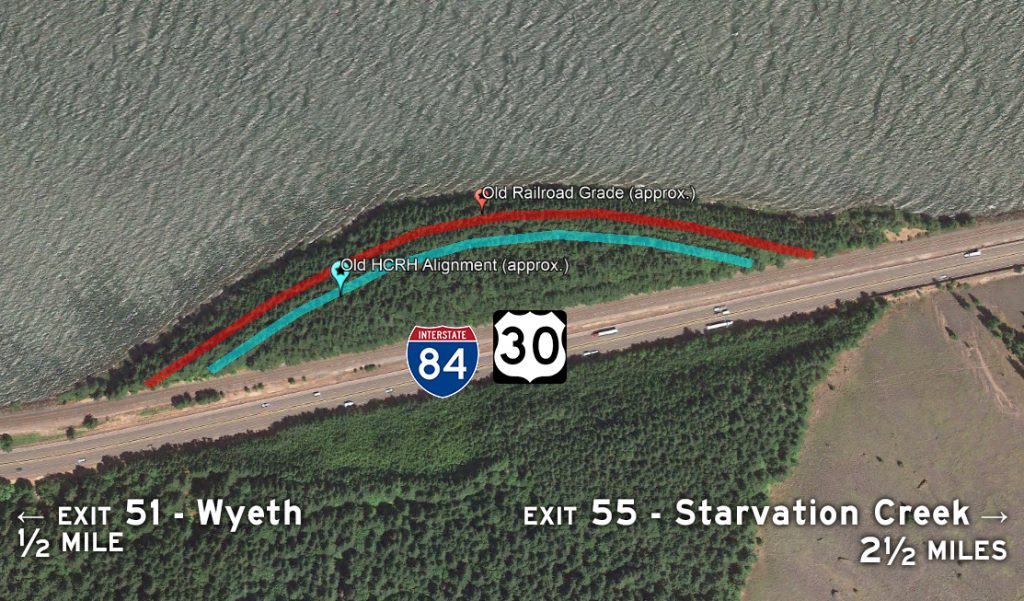 At this point, you can either continue scrolling to read up on the history of this tiny little segment (and some adjacent ones) or just jump straight to the photos.

A Brief History of the Shellrock Segment

This tiny portion of old highway originally was a part of The Dalles and Sandy Wagon Road, funded by state in 1872 and completed in 1876. The road itself was windy and steep, and the portion west of Cascade Locks was largely destroyed in 1882-83 when the Oregon Railway and Navigation Company constructed a water-level railway line from Portland to The Dalles. It wasn’t until 30 years later that the Gorge started becoming more accessible to vehicular traffic in a bid to showcase its natural beauty to the travelling public. As there was no state highway department at the time and gasoline taxes for road construction costs were still years away, the private sector was instrumental in funding these early highways. The portion around perilous Shellrock Mountain found its benefactor in 1912, Portland lumbermaster and philanthropist Simon Benson:

It had been urged that Shell Rock Mountain in Hood River County was an impassable barrier, and had it not been for the timely assistance of one of Portland’s prominent citizens the work would have stopped for many years. In the fall of 1912 Mr. [Simon] Benson placed $10,000 in the Governor’s hands to be used in connection with prison labor in building the road past this point, reviving interest through his splendid generosity.1

The Shellrock Mountain portion became the first constructed modern HCRH segment. However, I’m more convinced the adjacent orphaned segment was constructed a couple years later, in 1914-15. If so, then this section was first surveyed sometime between October 11, 1913 and February 5, 1914 and funded via a $75,000 bond approved by Hood River County residents on July 15, 1914. To spur construction, Simon Benson again stepped in, purchasing all of these bonds at par on August 17th.2

Eager to complete its portion of the highway by the summer of 1915, Hood River County moved quick to start construction. On August 26th, bids were opened for the construction of three segments of the HCRH within the county. The winner, the Newport Land and Construction Company, started work on September 18th. One of the three segments they completed was a 1.7-mile grade from east of Wyeth to Shellrock Mountain — the likely candidate for when this particular orphaned segment was originally built.3 4

As traffic and tourism increased throughout the Gorge in the years after its completion, it became clear that the road needed some upgrades. In fact, as early as 1932, Samuel C. Lancaster was designing a high-speed water-level precursor to the modern freeway. However, construction of a new highway (now Interstate 84) wouldn’t begin in earnest until after World War II. While some portions of the original highway were kept as scenic routes or otherwise remained on Oregon’s highway system, many others were destroyed, cut off or filled in when the freeway was built. The portion on and around Shellrock Mountain was no exception; when I-84 was constructed in the area around 1952-54, most of the part around the mountain was either buried or orphaned for many years afterward.5

The master plan mentions this orphaned roadbed when discussing plans for refurbishing the highway between Wyeth and Starvation Creek (Historical MP 52.8-57):

This section includes Shellrock Mountain. The option to provide a hiking or biking trail behind the binwall (in the rockfall catch area) was a low priority in the 1987 Study. There is a segment of pavement north of the Union Pacific Railroad that would be desirable to connect to other segments. Options other than those placing people in the rockfall hazard areas that connect the HCRH through this area need to be investigated once funding is available.9

When the plan was revised in 2006, a fascinating proposal attempted to both utilize this abandonned segment and keep trail users away from the dangers of Shellrock Mountain:

An option that is north of the Union Pacific Railroad from Wyeth to east of Shellrock Mountain, crossing over Interstate 84 to the Lindsey Creek State Park segment is proposed. This proposal includes a mile-long floating path in the Columbia River, similar to the Vera Katz Eastbank Esplanade in Portland.10

However, this alignment was probably the more expensive option, as it would’ve required two I-84 crossings in addition to the floating path. The state opted instead to construct the Shellrock Mountain portion of the trail entirely south of I-84. Ah, what might’ve been.

Get to the Photos Already!

From here on out, all photographs in this blog entry were taken by me November 2019 unless otherwise noted.

This segment was very difficult to access. I did not see any signs or markers along the old roadway, nor could I make out any pavement markings or even bare pavement. The entire grade was covered with a healthy layer of debris — years of accumulated bark, branches, leaves, moss, and other forest detritus — which made it uneven to walk on in places. I was surprised that the old alignment was a good 15-20 feet above the freeway. Since the old alignment hugged the hillside, it goes to show just how much earth was moved when the freeway was built 70 years prior.

This segment wasn’t the only one I explored on that trip. In the near future, I’ll post about a small segment to the west of here that was much easier to access, plus a small segment near Ruthton Point that was restored in the 1990s but forgotten. Both will have photos as well. Visit again soon!

Edit 12/3/2019: Replaced the PNG Google Earth map with a JPEG one for faster load time.